This race report was submitted by the 2018 Dirty Dozen’s 40+ 3rd place finisher, Antonio Garza. Head on over to Grue Grande to read about Antonio’s other adventures.

The Dirty Dozen Race hosted by Terra Firma Racing is one of my favorite events and is one that for one reason or another (sickness, work travel, adoption, etc.) I’ve only had a chance to do once before, and I loved it.  My first time racing the Dirty Dozen was in 2017 after my broken ankle and with low expectations, but ended up doing well, being really close to a podium.  More details on last year’s race are here 2017 Dirty Dozen To summarize that report:  I had regrets, I wanted more from myself during a race and I used that to drive me in 2018. 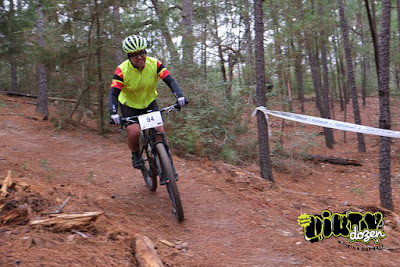 It’s so rare to catch me not grimacing on course.

The biggest challenge this year has been staying healthy since the kids bring home bugs from school.  It seems like clockwork that come last week of August or first of September, the whole family gets some kind of cold, and usually the kids get over it in 2-3 days while the adults take weeks to recover.  My performance chart shows the starts and stops from this (or just life and work sometimes getting in the way.)  So, my goal in the past year has been to ride more with friends and groups and have more fun on the trails.  I have work buds Brian and Hawkins and we do regular rides of the Brushy Creek Trails or Walnut Creek Park, sometimes venturing to other places but we try to hit the trails at lunch at least 2 times a week.  They are usually fast paced rides so they’re always a good workout.  There were also the Bicycle Sport Shop Thursday MTB rides and rides led by our MTB captains Jeremy and Wes.  I also rely on advice from my endurance racing friends Dave, John, and Tony when I have doubts about how to proceed when I hit an obstacle.

My race started almost like last year:  late to the start, I got there as the runners were taking off, so I just rode slowly behind the last walkers then I took off.  And now the mental routine started.  This year I burned more energy passing people because I remembered John saying about how the 12 is almost a sprint pace, and I also remember how it felt missing out on the podium last year by a minute, and how I almost hated myself for doing a 2-hour lap at Rocky Hill in 2012.  All of that fueled me during my weakest moments.

All of that fueled me during my weakest moments.

I had what would have been a fast first lap until the climb after the bridge toward the end at which point my SRAM master link decided to give up the ghost.  I just shook my head as I thought of Dan’s master link failure about a week earlier.  It looked like a plate failure with no shifting involved.  I’d never had a problem with master links before.  I spent way too long digging for the replacement at the bottom of my seat bag. I lost about 7 minutes unfortunately but I’d like to think that at this point my race was pre-disastered.

By the roughly 6-hour and 30-minute mark I’d done 8 laps which was a better pace than last year.  I really thought I’d be in a podium position so I was shocked when John’s buddy Shawn told me I was in 4th and a couple of minutes back from 3rd.  I felt a bit deflated but at the same time more driven.  I had thought I could slow the pace down for the 2nd half but this meant I couldn’t.  I had some caffeine and got going again.

I had some caffeine and got going again.

I had my bad lap in #9, but it was all mental because I really didn’t have a terrible lap time considering the few longer stops I had.  At this point I saw my wife and the kids as I came out of the barn.  I had moved up and got new gaps and the kids looked really excited about how I was doing.  That totally gave me a bunch of energy.

A little aside…. So much of this type of racing is mental!  There was one section in the course that kicked my ass for about 3 laps:  after the downhill berms almost at the end, you hit a muddy section before you pop out into a bit of pines then the BMX section.  That mud felt like it was grabbing my wheels, and I just went slower, but in the last 2 laps, I told myself to dig deep, hop over the mud (by that point, I wasn’t as concerned about energy conservation) and guess what?  It didn’t kill me and I went faster and it actually felt easier. Seeing my family, hearing my BSS teammates cheer me on as I crossed start/finish, John encouraging me every time he lapped me, all of that makes an impact.

Seeing my family, hearing my BSS teammates cheer me on as I crossed start/finish, John encouraging me every time he lapped me, all of that makes an impact.

With about 1hr 52 minutes to go, I figured I could do 2 55-minute laps, but I had to do a 55-minute next lap before I decided to do a last lap.  I got a 57-minute lap in leaving me with 55 minutes and I just didn’t feel like I had a 55-minute lap left in me with the slick conditions and my problem with my bar light (which I didn’t know of until I stopped but I kept hitting slick roots and almost falling and I hadn’t figured out why until after) so I pulled the plug there hoping that was enough for a podium. It was at that point that Shawn told me I’d secured 2nd and that made me very happy.  Being on the podium felt great, but shaking the hands of my competitors was the best since I had no idea who I was racing against during the race.  I finished 13 laps in 11 hours and 5 minutes.  Next year I want 15 laps! 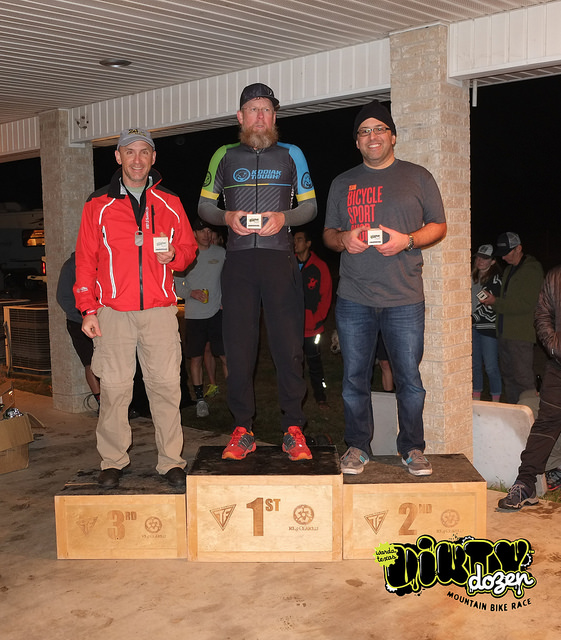 Now I want to go back and do another endurance race this year, but I’m going to have to really think about whether I want to do another Solo 24 (Going for a podium there would be cool) or train for the Enchilada Buffet.

This may be a good place to introduce yourself and your site or include some credits.

This may be a good place to introduce yourself and your site or include some credits.